Skip to main content
Mariah Parker ’13 is an elected politician, a hip hop artist, and a Ph.D. candidate in Language and Literacy Education. As protesters mobilized across the country this summer in response to the murder of George Floyd by an officer of the Minneapolis Police Department, Parker led thousands who were calling for change in Athens, Georgia.

Click Here to watch “A Racial Justice Conversation with Mariah Parker,” which happened at Homecoming 2020

The article below is reprinted from the 2020 issue of Owl & Spade, a magazine for alumni and friends of Warren Wilson College. To read the full magazine, click here.

Mariah Parker ’13 is an elected politician, a hip hop artist, and a Ph.D. candidate in Language and Literacy Education. As protesters mobilized across the country this summer in response to the murder of George Floyd by an officer of the Minneapolis Police Department, Parker led thousands who were calling for change in Athens, Georgia.

“So I’m out there at one point, standing on a Confederate monument, and the crowd is chanting ‘Say His Name, Which One? Say Her Name, Which One?’ at which point, I just broke down and started sobbing, with my feet planted on this relic of white supremacy and thousands of people spread out in front of me, because it was beautiful,” Mariah Parker ’13 said, describing the May 31st protest she led, “A March for a World Without Cops.”

It was one of many Black Lives Matter actions Parker organized this summer in Athens, Georgia, where she serves as an elected County Commissioner. She recounted this scene on her podcast, Waiting on Reparations, which explores the intersection of hip hop and politics. 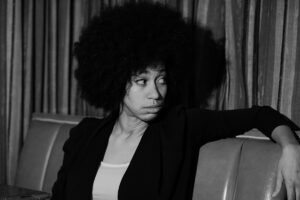 “I was so shaky. I couldn’t eat. I couldn’t sleep,” she said. “But I stood up because I felt like it was my duty for People of Color, Black people, and in particular Black women, Black queer folks, to take the lead in situations like this as the most marginalized people, to make the demands and be the face of change.”

Though the protest remained peaceful, her fears were not unfounded. After it ended, a few hundred people stayed behind to peacefully occupy the main plaza with tents. A curfew was put  in place retroactively without anyone knowing. The National Guard came into town and used tanks, tear gas, and rubber bullets against those who remained. Many were arrested, and leaders were separated from the rest of the group in what Parker believes to be “an act of retaliation and targeting for their involvement in bringing those folks together.”

“I saw firsthand how folks coming together to demonstrate, as is their right, non-violently, are met with violence,” Parker said. “I witnessed firsthand how the armed forces, the arms of the police state, are the agitators. And I witnessed this firsthand as well, how powerful it is when we come together nonetheless.”

The protest advocated for the 50/10 Plan, which Parker drafted together with the American Civil Liberties Union (ACLU) of Georgia. It called for transitioning 50 percent of Athens’ armed officer positions to social work, restorative mediation, mental health specialization, and other forms of compassionate community response over the next 10 years. 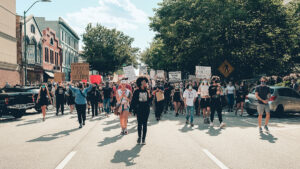 At a budget vote in June, the Athens County Commission adopted several elements of the plan, including adding  a social work position for the Public Defender office, adding a third mental health co-responder team for the Police Department, bringing EMS dispatch for 911 calls in-house, and raising Public Defenders’ salaries.

Parker said she sees her role in the movement as multi-pronged, as she recognizes that progress is made not through one single tactic.

“We need people in city halls to listen to the masses when they take to the streets. We need allies in seats of power to translate their outrage and heartbreak into concrete proposals that address the conditions they’re living in,” Parker said. “I see a lot of my role as a County Commissioner as continuing to mobilize people and do mass political education, in addition to making policy. So I continue to organize protests to give my constituents, the people I represent, an outlet for their frustrations and to remind them of the strength we have in numbers.”

For example, bringing people together around a shared goal, managing speakers, giving people a platform to give testimony to their experiences, and the “act of commanding a crowd” with her words are all skills she learned as Linqua Franqa.

“The ability to face down that fear with grace and think flexibly and creatively in the face of opposition are skills that I honed through hip hop performance,” Parker said. “I now use them daily in making arguments at city hall and facing down the public at these marches.”

At Warren Wilson, Parker studied Creative Writing and Modern Languages, worked at the Writing Studio, and wrote for the student newspaper, The Echo. Those experiences inspired her to get her master’s degree in Linguistics, and then to work toward her Ph.D. in Language and Literacy Education. Her dissertation focuses on activist literacy, or the ways in which interpreting texts, speaking, writing, and other forms of communicating are critical to successful movements toward social change.

“The way we define terms or frame arguments through language has very material consequences in the way that resources get allocated, in the way that law is upheld, or argued, or interpreted,” Parker said. “My background in discourse analysis impacts that very much.”

Her hip hop career is very influenced by both linguistics and politics. Linguistics gives her a toolkit to create really inventive hip hop verses. She uses hip hop as a platform to inspire people, do mass civics education, and share personal experiences. She hopes to inspire people to political action through music.

Parker seeks to follow in the legacy of folks like Angela Davis, Huey P. Newton, Martin Luther King Jr., and Malcolm X. When she was sworn into the County Commissioner office two years ago, she did so with her hand on the Autobiography of Malcolm X. That action went viral on social media, and she was interviewed by major news outlets such as Teen Vogue and Buzzfeed.

“Going viral helped build out a movement across all of Georgia, and nationally, of folks who support our work in Athens, are learning from our work in Athens, who may have been inspired to run for office themselves, having seen a young queer woman of color run and win, a young queer hip hop artist run and win,” Parker said. “To be part of that national conversation about what change looks like at a local level, what possibilities exist at a local level, and to be able to leverage national resources towards these ends in Athens has been a really good outcome.”

Moving forward, Parker has plans to continue the fight to end unpaid inmate labor in Athens, advocate for more affordable housing in her district, petition for the economic development department to invest in creating worker-owned co-ops, and establish a worker center as a place where folks can learn about organizing in their workplaces, what their rights are as workers, and help support people in agitating for better worker conditions and better pay in their workplaces. She also said she will continue to advocate for prison abolition and significantly reducing, if not ending, the practice of policing as it currently exists in her community.

“As an abolitionist, I believe that we abolished slavery, but we are still pushing to abolish other structures that enslave Black people, which include police and prisons,” she said. “At times I’m inspired, and at times I’m disheartened by the pushback I see from policy makers around our demands,” Parker said. “But mostly I feel very hopeful that we can achieve real material change in this moment, that we can educate others and bring them into the movement and gain momentum as we move along.”